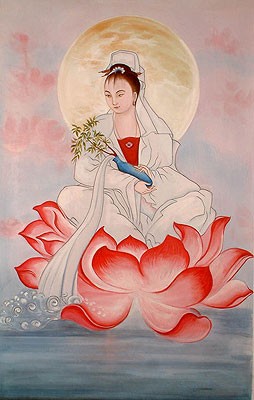 The goddess Kuan Yin is a symbol, not only of the Chinese assimilation of Buddhism, but also of the many hued flavor of karuna, expressed through the softer wisdom of a woman. She is a pointer to the re-emergence of the goddess and the gender transformation of Avalokiteshvara in China represents perhaps a universal imperative, which is similarly reflected in the emanation of the goddess Tara from the compassionate tears of the same bodhisattva. Though often images are encountered, which show her sporting a moustache, emphasizing masculinity; this is negated by the softness of her demeanor.

Can anything be more subtly female than her graceful poise – modest and inward looking, yet potent enough to generate and compassionately nourish the whole outside world? In the words of Martin Palmer: “The divine feminine cannot be suppressed for long. In China, it emerged by the transformation of the male into the female,” only god (or the goddess) knows how it will transpire in other cultures.