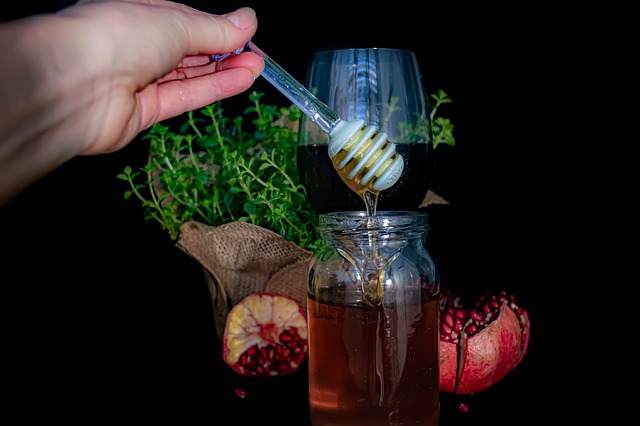 Rosh Hashanah (Hebrew: ראש השנה), (literally “head of the year”), is the Jewish New Year. It is the first of the High Holidays or Yamim Noraim (“Days of Awe”), celebrated ten days before Yom Kippur. Rosh Hashanah is observed on the first two days of Tishrei, the seventh month of the Hebrew calendar. It is described in the Torah as יום תרועה (Yom Teru’ah, a day of sounding [the Shofar]).

This new year is the year 5780!  This is a time for serious introspection, a time to consider the sins of the previous year and repent before Yom Kippur.  The great theme of Rosh Hashanah is repentance, and the overarching theme of the High Holiday season is forgiveness.

One of the ongoing themes of the Days of Awe is the concept that god has “books” that he writes our names in, writing down who will live and who will die, who will have a good life and who will have a bad life, for the next year. The actions that change the decree are “teshuvah, tefilah and tzedakah,” repentance, prayer, good deeds (usually, charity). These “books” are sealed on Yom Kippur. This concept of writing in books is the source of the common greeting during this time is “May you be inscribed and sealed for a good year.”

Rosh Hashanah is the first of three great festivals to be celebrated in the Fall. The other two are Yom Kippur (the Day of Atonement) and Sukkot (the Feast of Tabernacles).

It is understood by most Jewish people that repentance is the path that leads to salvation and the forgiveness of sin, which is secured at the closing moments of Yom Kippur. Though it is difficult to explain the difference, the Jewish community stresses forgiveness far more than personal salvation, especially as salvation is understood by most Christians. Jewish people are not as apt to think about personal salvation or a secured future beyond the grave in the same way Christians do.

However, Jewish people do think about forgiveness during this time of year, and are usually eager to repent before God and reconcile with whomever they may have offended as well. But forgiveness is viewed as temporal, needing annual renewal, and received on the basis of God’s grace as well as our repentance and willingness to be obedient to his law, found in the Five Books of Moses. At least this is the traditional Jewish teaching on the subject.

The major themes of the Jewish New Year are Kingship, Remembrance, and the Blowing of the Shofar.

After the Rosh Hashanah prayer service, Jews eat a festive holiday meal. Special Rosh Hashanah food customs have developed over the centuries. On the first day of Rosh Hashanah, a piece of apple is dipped into honey in the hopes of a sweet year. On the second day of Rosh Hashanah, Jews eat a new fruit not yet eaten in the season so a special blessing (Shehechiyanu) can be recited. Various symbolic foods—such as dates, pomegranates, pumpkin, leeks, beets—are traditionally eaten on the holiday.

This is usually when I get my annual dose of gefilte fish, as fish heads are also suggested food to begin the Days of Awe. Each of the chosen foods —generally a pomegranate, date, string bean, beet, pumpkin, leek, and fish head — symbolize a wish or blessing for prosperity and health in the coming year.

Rosh Hashanah begins at sundown on Sun, 29 September 2019.  So if I come to make amends with you for some stupid thing I have said or done, now you will know why!